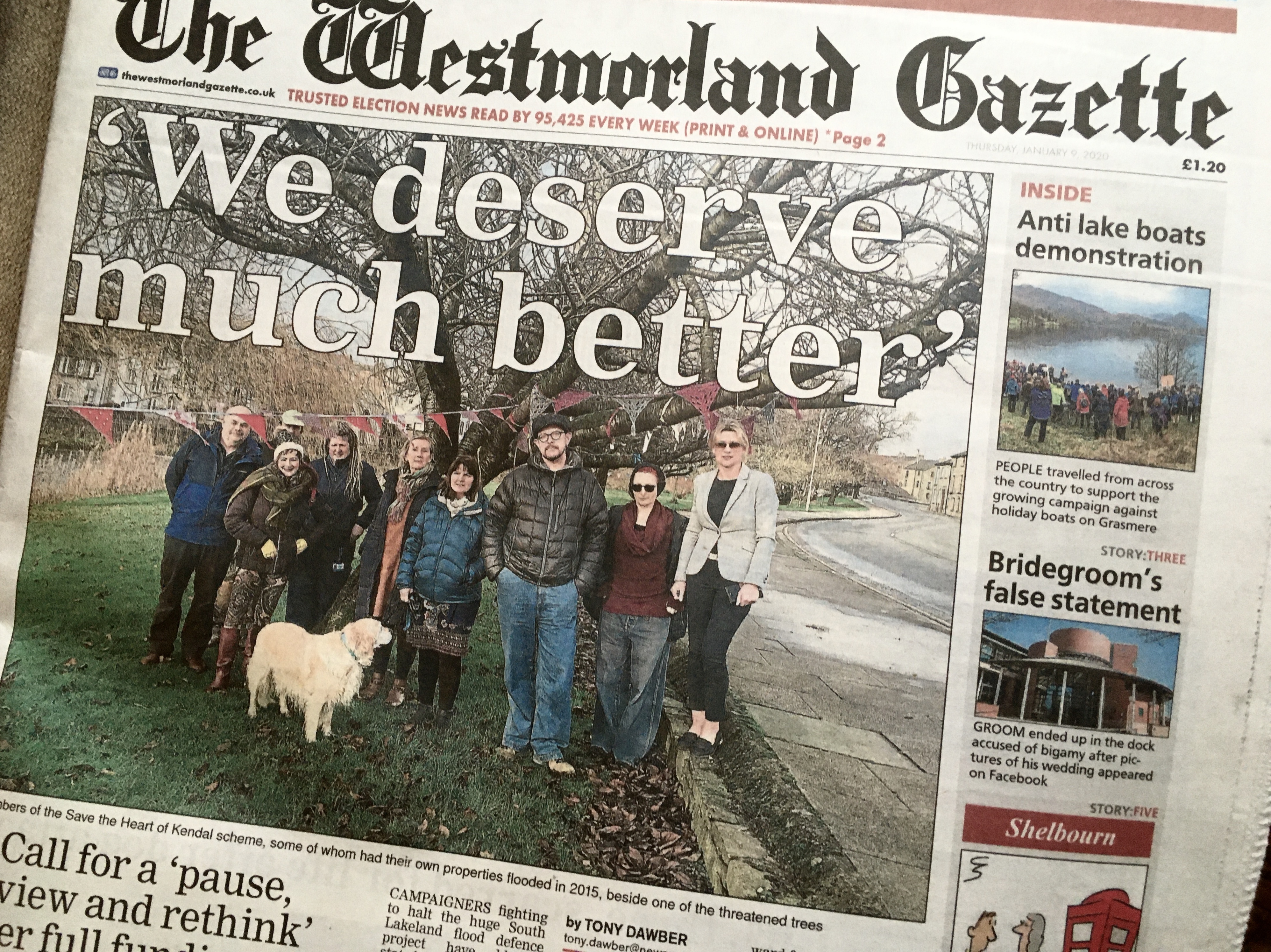 Save the Heart of Kendal are local people who care deeply about our community, town and wildlife. Many of our campaigners and supporters were flooded and we believe Kendal deserves much better than we are being offered. The current Kendal Flood Risk Management Scheme will not protect Kendal from another Storm Desmond, the first phase will newly expose over twenty houses to flood risk and increase the risk of catastrophic bridge failure, whilst increasing protection for 227 homes.

High concrete walls, huge dams proposed in phase three, and the removal of most of our riverside trees befit a project that belongs in the 19th century, not 2020. We only oppose the destructive elements of this scheme and have no issue with the works proposed for Stock Beck for example, which flooded about half of the homes in Kendal. The mechanisms of flooding in Kendal were very complex, surface water, rising groundwater, river and constricted culverts all contributed to flooding. The EA developer has never shared their full options appraisal. Their hands are tied, and the main reason this scheme is being forced through quickly is to secure £10 million of European Regional Development funding with a limited timescale and the sole purpose of protecting business; even though a significant number of our small and large employers do not support the scheme. We are very concerned about the carbon emissions, road chaos and impacts on trade and tourism of a scheme that will bring an estimated 30,000 lorries of concrete and materials into the north, centre and south of Kendal. We believe the outcomes do not justify the impacts on our cherished ancient townscape, river and environment.

The impacts of the scheme on protected or rare wildlife including otter, dipper, several species of bats, bullhead, declining Atlantic salmon and others have not been fully assessed. The loss of riverside trees and the services they provide by removing air pollutants, sequestering carbon and abating noise has not been fully considered either. Only 1% of the escalating £72 million KFRMS price tag is being spent on slowing the flow options in the catchment. Engaging with our farmers is a key part of the answer. We could develop and properly fund natural solutions on farms and support our catchment communities by investing in natural flood management and natural engineering. It works for Belford in Northumberland and it can work here alongside a range of interventions like properly funded property level resilience, water storage in existing catchment reservoirs and the options proposed for Stock Beck. Surely we can do better, before resorting to high concrete walls and dams in a SSSI and SAC protected river. We should not handover many tens of millions of pounds to large national or international civil engineering companies who will take the investment out of our area when we could invest in our catchment and our communities. As other towns in the UK are thinking creatively about flood management and funding models, for example, York, Pickering and the River Wyre, let’s look to those to find answers and a better future for Kendal.

The current Kendal flood scheme mitigation commitment of 3,666 replacement trees seems meagre in comparison to neighbouring Lancaster City Council’s commitment to plant 1 million trees. Our Government has committed to planting 30 million trees a year, and Kendal Futures are calling for 1 million trees in the Kent catchment. We need to raise our game. The five hectares of wildlife reserve being offered as mitigation is misleading, this land has already been reclaimed by nature when management ceased at Sandy Bottoms several years ago. Wildlife has colonised this area without our help; kestrel, barn owl, heron, sand marten, roe deer and otter can all be observed in the area. We call on the EA developer to pause, and for an independent review and rethink before irrevocable damage is done to our town and wildlife.