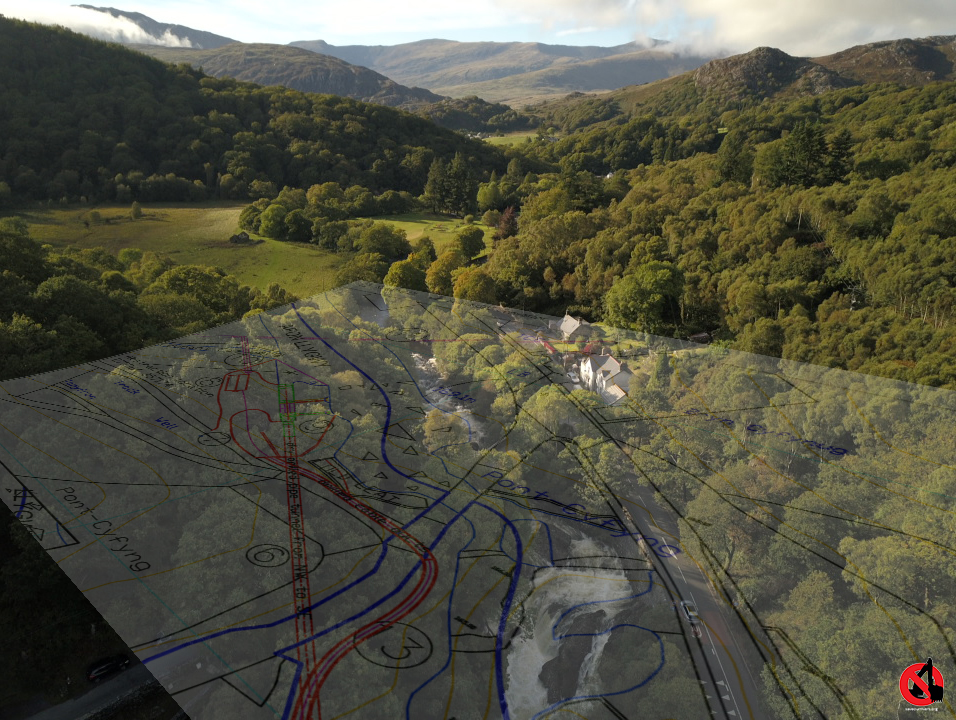 A planning application has been submitted for the hydro electric development of Pont Cyfyng Falls on the Afon Llugwy in Capel Curig Snowdonia. This is likely to be the largest scale and possibly most damaging HEP applied for in Snowdonia since the plans to dam the Afon Conwy were rejected in 2016.

The application is deliberately vague and misleading in many aspects, but this is what we know so far:

The development is based in a National Park, will sit in an area of woodland registered as ASNW (Ancient Semi Natural Woodland) and lies shortly upstream of a SSSI. The site sits in the heart of Capel Curig village, a hotspot for outdoor tourism containing numerous pubs, cafes, hostels and the National Mountain Training Centre at Plas y Brenin. Capel Curig is popular for the beautiful free flowing Afon Llugwy and as the access to rugged peak of Moel Siabod.

The plan is to divert a large proportion of the river into a new channel, pass it through a 2m diameter 100m long tunnel dug by a 10-ton tunnel borer under the historic Telford road bridge. Then through a large diameter pipe to the turbine house to be built downstream on river right, between the second and third falls, where the outflow will fall into a newly excavated “plunge pool”.

Many of the impacts of the scheme are un-quantifiable due to the poor quality of information provided in the application. There is no assessment of traffic impacts, effects on the footpath along the river, the timescale of construction or the size and location of construction compounds. Here is what we can work out.

The Arboricultural report lists 87 trees in the vicinity of the development, 31 are listed to be felled, over a third. Some of these trees are suffering from Ash die back, but many are not (because they aren’t Ash trees), in any case Ash die back would not have the impact of removing all the trees in a single event.

Amount of water to be removed

The HEP will remove 70% of the river above a tiny compensation flow, up to a maximum of 4.2m3/s  (this will occur when the flow of the river reaches 6 m3/s). Using flow data from CEH (Centre for Ecology and Hydrology) we can therefore calculate that 70% of the flow will be diverted around the falls for over 75% of the year, and over 85% of the time during the summer months.

This will have 2 major impacts, firstly the dewatering of Pont Cyfyng will have a profound effect of the beauty of the falls, a major tourist draw; visible from the A5, a view point layby and the popular footpath up Moel Siabod. Secondly the ecological impact of this “depleted reach” on the bryophyte assemblages and other flora and fauna of this section is not to be underestimated. The ecological survey presented by the developer states:

One must bear in mind also that only a very small proportion of this large river will be abstracted so it is considered that any potential impact on the in stream ecology is likely to be extremely modest.

Impact of built structures on the landscape

The inlet structure to be situated on the river right bank above the falls will be huge. A 2m by 15m metal grill in full view of river users, walkers on the footpath along the river and travellers on the A5 and Telford bridge. The turbine house will be situated on the wild river bank between the second and third fall, visible from the A5 the Telford bridge and the viewpoint layby. Neither structure has a photomontage, artist impression or even detailed plan drawing to show how it will fit into the landscape.

The photo below shows the shear scale of this development compared to the site:

How much power will be produced?

The power produced is very limited compared to modern renewable production, this is one of the reasons the FIT payment subsidy this scheme will rely on to be profitable is being cancelled this year. The installed capacity of the scheme is around 400KW, roughly 1/10th of a single wind turbine of the type installed off Llandudno, or 1/20th of the new generation of one of the new wind turbines at Burbo Bank Liverpool. Whilst the application boasts that power produced will be:

the equivalent required to supply 21% of the homes and businesses per year with electricity in Betws y Coed and Capel Curig, or 71% of those in Capel Curig only.

It is important to look at this more closely, the population of Capel Curig is 226 permanent residents. However the 400kw produced during the 25% of the year the scheme reaches full power is only enough for 40 people to take a shower.

On a more basic level Save Our Rivers believes the free flowing rivers and falls of our National Park are worth far more in their natural state than when diverted and dammed to make kilowatts and pounds.

We urge everyone to attend the public meeting on Friday 8th Feb at 7.00pm Capel Curig Community Centre and raise their concerns with the developer there.

Details on how to respond to the planning application will provided when we have more information.

The proposed inlet and defunct leat, including the ancient woodland adjactent to the Afon Llugwy.