By Dan Yates8th December 2019Heart of Kendal
No Comments 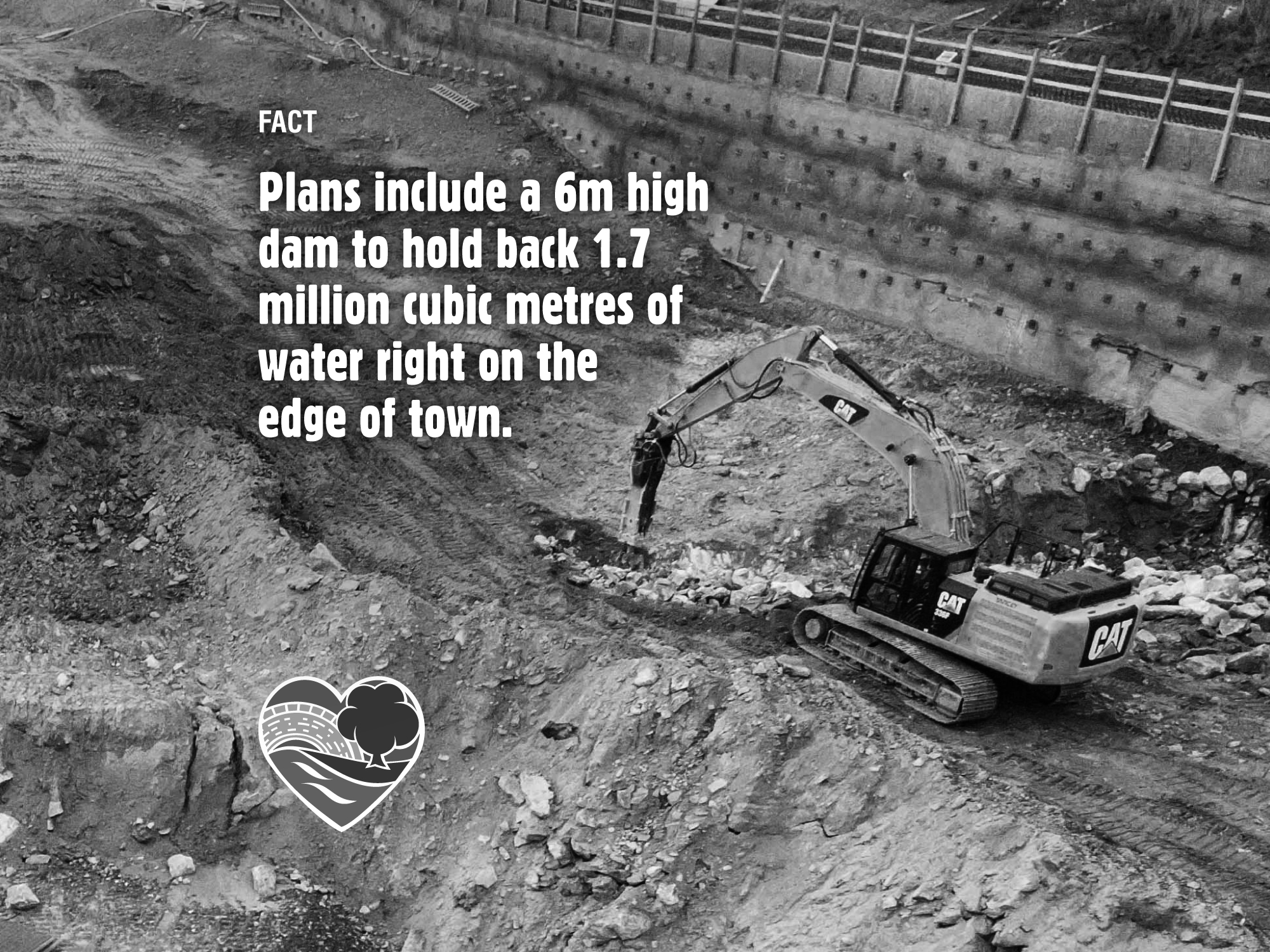 The proposed Kendal Flood Risk Management Scheme (KFRMS) is a hard engineering option that will include the construction of at least one huge dam in the river system, remove most of the riverside trees and habitat through Kendal town, and through the construction of high walls destroy the spirit of place in an ancient town centre and conservation area. KFRMS is now forecast to cost over £72 million. The commitment to Natural Flood Management (NFM) in the catchment is less than 1% of this amount.

Would NFM work in the Kent catchment?

The Environment Agency estimate that it would take over 20,000 small natural flood attenuation features like swales, kested hedgerows, bunds, berms and leaky woody structures each holding over 250m3 of water to temporarily store or attenuate the 6,000,000m3 of water predicted to be contained by KFRMS.

NFM or natural engineering solutions have largely been discounted by the EA because the catchment is considered unsuitable due to its upland characteristics.

The upper Kent catchment including Kentmere, Longsleddale and Bannisdale certainly is ‘hill country’ yet, here, there are many opportunities to manage runoff, slow the flow and hold water. Significant water storage features already exist in the catchment, several large reservoirs were built and many more were proposed – evidence that our landscape can hold significant volumes of water.

If the catchment were to be comprehensively assessed – with the buy-in of the farming community and landowners – for its capacity to temporarily store floodwater the sites required could be identified where runoff can be held, and stream flows attenuated.

Small natural flood attenuation features or natural engineered structures typically hold between 150m3 and 2,000m3 of water with a ten-hour drain-down time, these cost between £500 and £5,000 each (achieving the same volume of flood attenuation as the KFRMS for less than a third of the £72million spiralling cost of concrete walls and dams).

Detailed modelling was carried out for the Rivers Trust by JBA Consulting and Lancaster University[1], the report found that large scale NFM interventions have been shown to have a significant effect for a range of catchment conditions including and up to the streamflows experienced for the extreme Storm Desmond event in December 2015. There is great potential for agricultural management to become a major part of improved strategies for controlling runoff. Water quantity and quality can be managed at catchment scale by slowing, storing and filtering runoff.

Research at Belford showed that local flood peaks were reduced by 35%. The Belford Burn natural engineering approach cost £200,000 whereas the likely cost of a hard engineered flood scheme for the town would have cost in the region of £2.5 million[2].

Tree planting, leaky structures in streams and timber bunds reduced peak river flows in the Pickering by between 8 and 10% during a potential flood event in 2015[1].

Woodland creation on a significant scale in a catchment can reduce flood peaks by physically slowing the flow along rivers and flood plains, intercepting and evaporating rainfall, protecting river banks and increasing water storage in soil, and infiltration.

Scientists at Southampton University showed that strategic planting of trees in flood plains, and river restoration resulted in a reduction in flood peak of up to 20%[2].

Agriculture can be a cause of increased flood risk and a major potential means to alleviate these flood risks. Agricultural policies and associated subsidies pay little or no attention to the flood risk dimensions[3], some examples include intensive field drainage, high stock grazing densities and greater exposure to rapid run off.

Potential solutions include the importance of wide margins, buffer strips and trees and woodland on flood plains and adjacent to rivers. The Pontbren Project is an example of a natural solution to flooding that delivers benefits to farmers and communities[4].

Woodland planting, temporary wetlands and peat bog restoration all create and improve habitat. River restoration improves water quality, increases volume storage, channel diversity and friction, but it is also important for rare and declining wildlife for which the river Kent is home.

By using NFM we can sequester and offset carbon through woodland planting.

There are not many 100km2 catchment scale NFM schemes. Modelled evidence and common sense determine that a significant level of flood attenuation can be achieved with natural flood management and natural engineering in the catchment. In combination with re-tasking reservoirs to temporarily store winter floodwater, property level resilience, and the benign elements of KFRMS, we should implement Natural Flood Management before resorting to building dams, laying concrete – with the associated high carbon emissions – and building ever higher walls.

But, we can pay farmers and landowners to slow the flow!

Before it’s too late to act, we are calling for the EA to fully investigate Natural Flood Management and to Pause, Review and Rethink the KFRMS. Please sign the petition https://www.change.org/p/secretary-of-state-for-environment-stop-review-and-revise-kendal-flood-management-scheme