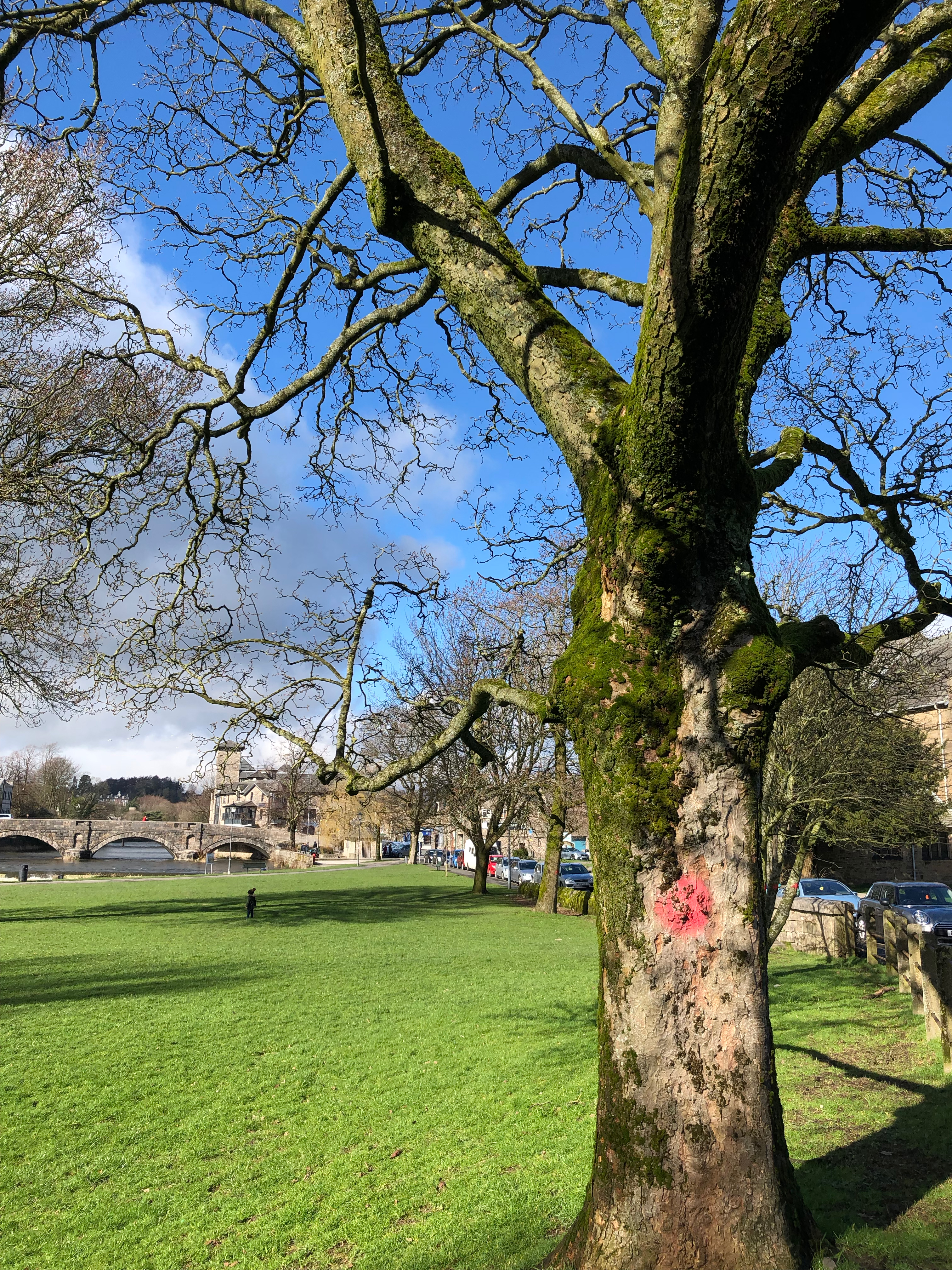 Mark Cropper, Chair of Kendal Futures has raised extensive concerns regarding the flood management and the conduct of the Environment Agency.

Observations on their attitude, performance and public and private communications in relation to the Kendal Flood Defence Scheme 2015-2021

This personal statement addresses my concerns about the way EA has handled the flood risks of the River Kent. While the views do not represent the following organisations (who have not been consulted in its preparation), they are partly informed by my roles in them:

Chairman of James Cropper plc, owner of Kentmere Reservoir (see below) and whose Burneside Mills manufacturing site was flooded in storm Desmond.  I led EA contact over many years, but in respect of Burneside :

EA would not provide any protection unless we paid for it

We did not want EA’s protection as it ignored key roles of ground- and surface-water.

A replacement bridge over the Kent lowers upstream flood levels by 0.7M and helps protect some bridges which played a part in the Desmond impact.

We invested heavily in resilience measures to reduce impact /cost and speed recovery.

Founder and CEO, Ellergreen Hydro, a builder of hydro schemes, dependent on an understanding of hydrology and how water flows in catchments. Inevitably this has included working with EA in Cumbria and elsewhere since 2009.

Member since January 2018, vice chair and now chair of Kendal Futures, a public/private regeneration partnership that has led and is now responsible for delivering a Vision for Kendal, with financial & other support from South Lakeland District Council (SLDC) and most Kendal large businesses. Many of these were flooded, but few, if any, are impressed by EA’s approach, despite (or because of) the EA briefings I have insisted on throughout.

Board member of Lakeland Arts’ Abbot Hall refurbishment project (Abbot Hall badly flooded in Desmond.). I have been shocked by EA’s disregard of heritage assets. (More details on request)

Member of a number of local cultural & social organisations which provide me with much informal information & feedback that does not reach the public domain. I am also a supporter of Save the Heart of Kendal (STHOK). Groups supportive of the EA scheme say: trust the experts. But others ask ‘what if the experts are inexpert?’

In EA2025 Creating a Better Place in June 2020 (re-issued in September after laying before parliament), EA restated its terms of reference, mission and approach. Key points include:

We create better places. We know we cannot do this alone…

We need to adopt flexible approaches to building resilience / Our thinking has to change faster than the climate. Our current ways of working have been developed through events experienced in the past – rather than challenges we face in the future.

We will be open, honest and humble in our conversations.

The EA Culture is outcomes-focused, embracing leadership and a “yes, if” attitude.

We will continue to strengthen partnerships and foster new ones.

In my direct & indirect experience, the EA local hierarchy has demonstrated none of these. I have records of some 20 meetings that can be produced if required.

Summary of the process issues

The scheme is proceeding because Kendal was one of first locations to flood very badly in Storm Desmond, while others impacted later have not got money. Phase 1 was unlocked by time-limited £5.34m EU ERDF funding (7% of the total), obtained by SLDC as EA was ineligible. The preliminary stages were thus unacceptably rushed.

EA claims that 1,151 businesses employing 6,105 people will be better protected, saving economic damage of £880m (a huge % of local economy). This is a 12:1 benefit/cost ratio, but I am not aware of any evidence to support the figures. Most business flooding in December 2015 did not derive from the river.

Although admitted time and again in private discussions, EA has never publicly disclosed that the scheme cannot and will not protect against ground/surface water.

Another direct conflict with EA’s stated aim of ‘open & honest communication’ is that they have acted throughout like a lobbying organisation instead of one with a duty to present the situation objectively and calmly. The PR they have put out has been overwhelmingly positive, with no mention of the scale of negative impacts, and all the while giving the impression that the scheme would “save Kendal from another Storm Desmond”. This reached a crescendo before planning permission was obtained, but they continue to use public funds to promote the scheme energetically.

Further examples of failure to be open and honest occur in the planning application, which (as I stated at the time) was almost impossible for most people to comprehend. Public communications completely underplayed the impact. Visual renderings (normal in much lesser applications) were absent, and only provided by public demand at a later date. The application was also disingenuous and misleading in the summary drafting. Heritage impacts were listed as ‘significant’ in the main text, but ‘moderate’ in summaries. (under Landscape & Townscape Character for the urban river corridor down Aynam Road, p218 of the heritage statement says the removal of railings, felling of all trees, and construction of flood defence walls would have a major adverse effect on the magnitude and a very large adverse effect on a significant scale. In the summary document, p 14 this comes out as moderate adverse effect on the character of the area, albeit with the caveat that this is 15 years after construction).

Scant regard was paid to the statutory need to seek and heed the comments of Historic England, whose pre-app advice (18 August 2018) emphasised that:

The historic relationship of town & river is a central part of the town’s quality of life.

The river is the setting of some of Kendal’s most important heritage assets including many listed buildings.

“these proposals have the potential to have a profound impact” / considerable impact / very harmful.

“given the extremely tight timescale before submission, there is insufficient time to properly consider a scheme of this scale and complexity… in this context the proposed prior public consultation just 3 days before submission allows no time for public understanding, reflection and comment”.

I understand HE staff were not permitted to formally object to the scheme, because it was politically complex and required notification to Secretaries of State.

A demand from some quarters for more glass panels in the walls was met by offering a design but a consistent refusal to fund all of them, limiting the scope.

EA have continued to ignore public concern urging a re-think, despite many reasoned arguments and a petition now standing at 8,500 signatures (a huge number in local terms). Since the issue is very politically and emotionally charged, with many residents understandably fearful every time it rains, I accept that deciding on the way forward is not easy. But more openness, honesty, humility and lateral thinking by EA from the start would have allowed a much higher quality of discussion and decision-making, bringing people together rather than driving a wedge between them that seems likely to persist for decades. This should have included a willingness to speak plainly and frankly to government and politicians (local and national).

EA staff did acknowledge privately time and again in meetings with me that they had been set a very difficult task: another Storm Desmond in Kendal simply cannot be prevented. The size, topography and hydrology of the catchment areas simply do not permit a good scheme. Even if every option had been pursued (tree planting, natural flood management, defences etc) none would be enough. Some EA officers I spoke to acknowledged that in the long term (with long term solutions) the scheme was unlikely to be wanted or needed and there were better options. EA Area Director said to me it was the most difficult flood project he had experienced. Challenged on the scheme’s shortcomings (which I have done several times), his fallback position was it had to be delivered to protect people’s mental health. None of this was disclosed.

EA public documents do say in small type that the scheme only provides ‘adequate’ 1:100 year protection if all three phases are delivered. This is the basis of the business case for which it was granted £76m of funding.

The Phase 3 element is hidden by a complete lack of transparency. Based on extensive dialogue with farmers & landowners whose goodwill is needed, I can say:

Communications with property owners have been appalling or non-existent.

Required land will not be secured without landowner legal consent, currently unlikely (EA has ruled out compulsory purchase as “not the way we work”).

Surveys, design and modelling are not complete. Designs not revealed even in outline until mid 2021.

No budget for loss of trade (necessary by whatever means EA secured land).

EA stated to me on 7.9.2018 that Phase 1 sign-off not possible unless full business case & Phase 3 conditions met. Someone has clearly reneged on this.

So no evidence EA can deliver promised capacity within budget (c£50m for phases 2 and 3 combined), or within feasible timescales and deliverability.

When asked “what happens if you can’t deliver phase 3”, the EA officer didn’t feel it was his responsibility. Devastating!

EA was quick to dismiss the potential storage available by maintaining water levels at a lower level in Kentmere reservoir (owned by our business James Cropper plc). The evidence I have seen suggests their analysis failed to account for the fact that while the catchment is a small fraction of the overall catchment, the rainfall is very high.

On 21.05.2020 another factor with high political stakes emerged. In response to a call from the Kendal BID for the scheme to be paused and reviewed the leader of SLDC was quoted Westmorland Gazette as saying that not only would that risk losing all the funding but also “we could be looking at… a multi-million compensation claim – a cost that would be borne by the district’s taxpayers”. I interpret this as meaning the contractors could sue for breach of contract, though this is speculation.

The failure at the heart of this programme is the refusal to acknowledge there is a problem. The lack of honesty around the project goes even deeper. EA’s stated aims make much of the importance of collaborative working. Completely inflexible to new approaches, they are closed and arrogant in conversation, exhibiting the opposite of partnership working. If EA was truly willing and capable of doing this, then it would engage government and all the different agencies and communities required and work to arrive at the holistic solution needed. EA resolutely fails to meet its declared aim to respond to feedback and work in partnership with others competent and capable of technical and strategic creativity, exemplified by its attitude to Cumbria Strategic Flood Partnership.

The blank refusal to consider more complex, nuanced long term approaches also goes in the face of the EA’s own evolving position on the role of flood defences in addressing the increase flood risk associated with climate change. EA continually claims a duty to spend taxpayers’ money carefully, but the net result in Cumbria is often very far from representing stewardship or value for money.

While protecting Kendal from another Storm Desmond is likely an impossibility, the issues are not without remedy, as I shall show in another paper in due course. The scale of funding for the Kendal scheme at £76m could easily facilitate this.