So it has happened again. RWE have resubmitted the planning application for a hydroelectric power station on the Afon Conwy. Save the Conwy has spent the last week pouring over the hundreds of pages of information. The application contains some further information deemed missing from the previous one but essentially describes the same scheme. There is no change in the size or position of the infrastructure, the power that will be produced or the amount of water taken.

The application can be viewed below:

As a result Save the Conwy along with all associated groups;

feel this application must be strongly objected to and need your help to do it. This is a brand new application and even if you objected last time and your objection letter is still valid in all its’ points it must be sent again with the new reference numbers and scheme description.

A template letter head can be found below.  Make sure you add your own name address and it is obviously only a letter head, add the details of you own objection below. The letter can be posted or emailed.

Use this letter template to object.

Please object and let the RWE know that we will not lose interest in preserving our National Park and that we will be here to fight for it however often they try. Let the National Park know that people want Snowdonia to be protected and not exploited for its’ resources and that some places are too special for any form of development.

Think about what is important to you, the community, the environment and the national park. Some topics you might want to cover:

The National Park is the wrong place for a scheme of this size:

The section on energy states

Although the power produced by the scheme is low, set at 5MW to avoid immediate dismissal by the national park and to allow it to take advantage of very generous FIT payments meant for households and farms. The damage and infrastructure is the same as that for a much bigger scheme. A £13 million pound project by a foreign owned power giant is not a “small-scale renewable energy developments to meet domestic or community needs”. Snowdonia’s power needs are already met by the existing 82MW of installed hydro making Snowdonia a net exporter of renewable power.  From the same document:

The 20 or so hydro power stations which are located in, or use water from, Snowdonia have a combined total installed capacity of some 82 Megawatts (MW). This is far in excess of local demand and results in the area being a net exporter of electricity.

All power produced is therefore to full fill needs outside of the park, not for “domestic or community” needs

-No thought for decommissioning:

There is a legal requirement for all schemes such as this to have plans in place for decommissioning, including a financial bond set aside to finance it. RWEs statement on decommissioning is:

The removal of in-river intake weir and tailrace would potentially result in more damage to the environment than leaving them in situ.  Hence, subject to the decommissioning requirements of a planning related condition, it would be prudent to make them safe and leave in-situ.

This is clearly unsuitable as the most damaging aspect of the infrastructure, the weir, is to remain in river and there is no financial bond.

-Damage to the environment:

This will occur both during operation and construction. The proposed development will affect a SSSI containing many section 42 listed species (species listed as of principle importance for conservation of biological diversity in Wales) therefore the SNPA as the planning authority have a responsibility to protect them. There is no longstanding or peer reviewed published scientific research on the effect of hydro schemes on such a site and using a pre-cautionary principle as required would suggest that this scheme should be refused.

Details regarding the damage to kayaking can be seen here

The river is one of the major Salmon spawning rivers in Wales / the UK to risk damage to such an environment through reduced reach and the insertion of manmade barriers is absurd. Fishing is a major recreational pass time and creator of income for the local area, rivers on which it depends either directly or indirectly need protection.

This will be the one of the largest private construction projects ever to have been built within the National Park.The scale of disturbance and damage to local communities during the construction period will be immense. Construction is proposed to last 18 to 24 months but looking at RWEs record on the Dolgarrog refurbishment it is certain to be longer. Our Planning Engineer estimates that digging the tunnel section alone will require the removal of over 6300 m3 of rock, equivalent to 1400 18 wheeler lorry journeys on one of the narrowest sections of the A5. This section of the A5 is used by visitors from England to visit Snowdonia and the upper works will occur at the access junction to the community of Penmachno. With large depot areas at the top and the bottom of the Fairy Glen the area will become a construction site.  How many local businesses reliant on tourism can survive 2 years of disruption?

There are few perceived upsides to this scheme. The level of power produced is small and variable. Using RWEs own figures the peak production of 5MW is equivalent to less than 2 modern large wind turbines and the scheme will only produce this for a maximum of 54 days a year. Due to the schemes reliance of river levels for an estimated 128 days it will produce nothing at all. It is difficult to justify the environmental cost of this scheme even in relation to fossil fuel power stations. See

After the construction is finished (around 2 years) no significant employment is likely to be created by the scheme for the rest of its existence (the RWE scheme in Dolgarrog has run for around 90 years) and it will be run remotely from an existing RWE control centre. 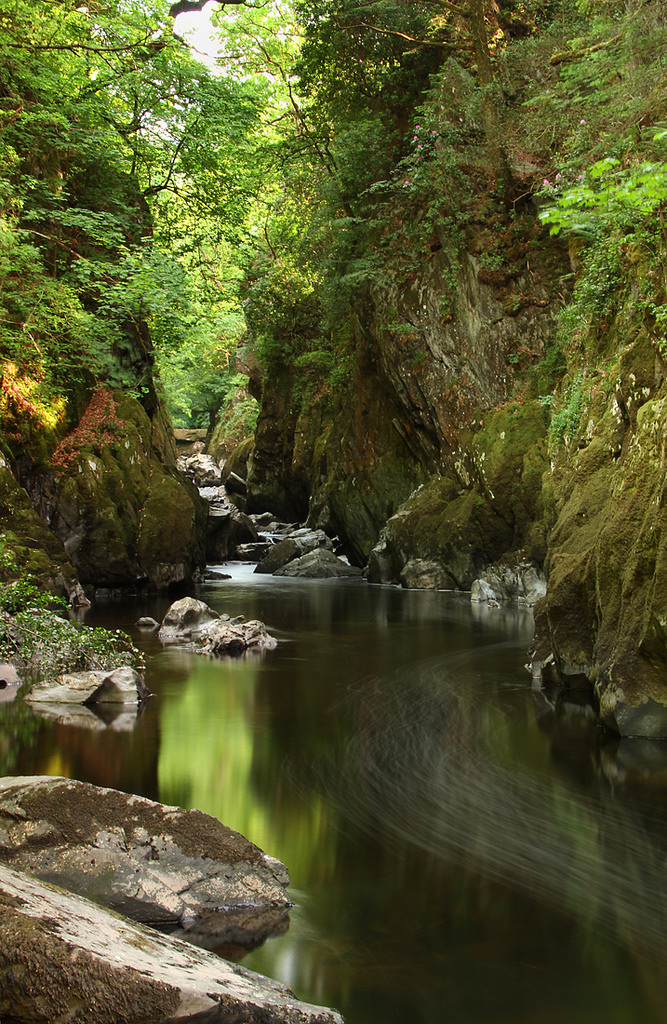